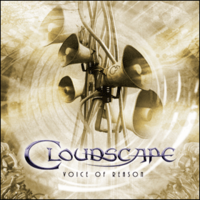 CLOUDSCAPE – Voice Of ReasonSwedish progressive power metallers CLOUDSCAPE announce the release of their fifth studioalbum “Voice Of Reason” on January 8:th, 2016.To get a little taste of what will come, we give you the first single “A New Design”Since the release of ”New Era” (2012) Cloudscape have done several liveshows to promote the New Era album and in February/March 2014 Cloudscape joined forces with symphonic progband ”Royal Hunt” and did a 3.5 week long European tour ´visiting 17 cities for shows all over Europe and also released a very limited ”best of” album entitled ”Touring Europe with A Blast From The Past”. However, the songwriting for their 5th album to be entitled ”Voice Of Reason” started in 2013 and have since then been going on in a nice pace with a certain goal to create an album with strong melodies, dynamic songs and more hard-hitting metal songs. Voice Of reason is also the first album in the Cloudscape discography to have a titletrack. The song is very dynamic, progressive and majestic and musically it shows exactly what Cloudscape is all about all wrapped into 1 song. Voice Of Reason consists of 8 songs and it follows the traditional Cloudscape style and trademark and also flirts a bit with the early days plus takes a step further to new unexplored territories for the band.